What a lovely sound, eh? That's about the size of how I feel, though. It's the day after Thanksgiving, and I feel slumpy and lethargic, hungover without the headache, though through the course of the day I had just two glasses of wine and less than a glass of beer. Turkey and all that other stuff just wore me out, I guess. Holidays are a lot of work.

"That other stuff" yesterday included:

-shoveling the driveway. The Catbird had done this before I got home on Wednesday, but it had a good 4 or 5 inches of snow since she had last done it.
-getting the car back. We live on a hill. We don't have snow tires on the vehicle yet. Our road had not been plowed in some time, and I lost traction about 30 feet short of my driveway. So I parked down at town hall and had to walk down there, clean off the car and drive it back.
-washing a mountain of dishes. My primary job at holidays is to keep the sink clear so that cooking can flow in an uninterrupted manner.
-Skyping with the Magpie in Japan, who dealt with being away from home on a major holiday for the first time very well, and who also learned that going to a karaoke bar is not the best thing for a slightly sore throat (she sounded a little like Lurch up there).
-Keeping the Table Shark--err, dog--away from the turkey. And out of the garbage can. We were not 100% successful in this venture, though it wasn't as bad as last year, when she scarfed a whole wing off the platter.
And, of course, eating.

Today I find myself with a day. A day to write. I'm close right now to my NaNo goal of expanding my current project by 50,000 words. I'm about 4,800 words short, so I can certainly do it--but that post-Holiday sluggardliness is tough to battle through.

Of course, I've learned the best way to deal with this stuff is mostly just to power through it. And so, it's off to fix another cup of coffee and then it will be time to dive in. No Black Friday for us.

By the way, I should point out we had a lovely day here. I sound like I'm complaining, but I'm not. We missed the Magpie but enjoyed each other. Hope you had a nice Thanksgiving (if you celebrate) and have a great weekend!

Posted by JeffO at 8:54 AM 5 comments: Links to this post

Email ThisBlogThis!Share to TwitterShare to FacebookShare to Pinterest
Labels: Thanksgiving


This morning's map as per the National Weather Service's webpage: 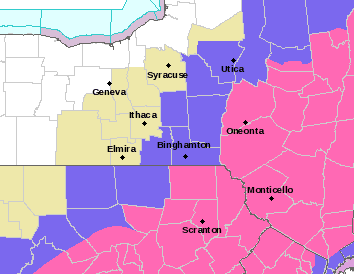 I'm living in the pink zone, the 'Winter Storm Warning' Zone, the '6-to-10 inches of snow' Zone. Of course, folks out near Buffalo would probably snort and say, "6 to 10 inches of snow? Wuss. We'd kill to have 6 to 10 inches of snow." We don't go out on Thanksgiving as a rule, haven't in some time, so we're okay, and it sounds like it will be largely over by tomorrow morning, so I'll get to work off the turkey &c. ahead of time. Hopefully, I'll come out about even.

For those of you who are traveling, be extra safe. This is a big day on the roads in America, and if you're in the northeast in particular (this storm systems spreads from Maine clear down to West Virginia, and there are A LOT of people in it) use extra caution and good judgment. Drive safe, be smart, and have a Happy Thanksgiving.

Posted by JeffO at 6:48 AM 4 comments: Links to this post

Email ThisBlogThis!Share to TwitterShare to FacebookShare to Pinterest
Labels: Thanksgiving

After a rough week on the writing front, I managed to squeak out a few hundred words on Saturday followed by two good sessions Sunday which added about 3000 words to my current project. And, even better, I feel like those were 3000 pretty good words that add to my story. Yay. NaNo's handy little statistical dashboard shows I'm averaging a hair over 1,700 words per day, and tells me I'll 'finish' on November 30 (the previous weekend's writing blitz added so much I was projected to finish around the 24th or 25th, so I've fallen back a bit). I still don't know how 'finished' I'll be at that point, but I'll certainly be much further along than I was in October.

Meanwhile, I've decided it's once again time to step back from this blog for a little bit. I woke up this morning with absolutely no clue of what I was doing today, an all-too common occurrence lately. I don't want to subject you fine folks to these scrambly things that sound kind of self-pitying when I get right down to it (like Friday's). I've got a lot of things on my mind besides my NaNo project right now. I don't mind the work that goes into blogging (I like it, in fact, otherwise I would have stopped long ago), but it is a distraction for right now that I don't need, so it's time to take a step back. I figure I'll still cruise around and read what you all have got to say, but it's time for me to go quiet for a few weeks. Thanks for your support, I'll see you soon!

Posted by JeffO at 6:26 AM 7 comments: Links to this post

It's Friday. Normally, I get my blog posts done in the morning, but I've been slipping lately. I haven't been thinking about the blog post much this week (I lie; I've thought about it several times this week, but never got much beyond "Friday's coming."), and we went to the school musical last night which was fun (no, the Catbird opted to sit this one out; she's on stage crew instead) but didn't allow me the time to think or write.

Not only do I have no blog post today, I have not written anything on my NaNo this week beyond some scribbled notes. I'm just short of 25,000 for the month, but after Saturday's brain-deflating splurge, I've been inconsistent. I'll get going again--weekend's coming.

I was going to reach back into the 'archives'--the vast file folder on my hard drive with ideas and started blog bits, but the one I was going to use, well, it was based on a news item that doesn't look so reliable in hindsight.

And so, we need something goofy. I hope I haven't put this one up before. I looked and couldn't find it, so maybe I haven't. Enjoy your weekend, all.

Posted by JeffO at 7:39 PM 2 comments: Links to this post

I forgot to update my NaNo word count yesterday. It will always look to the whole world like I did nothing yesterday, that I'm a slacker, a NaNo pretender. t's not entirely true--I actually wrote about 300 words yesterday that were intended for my project. I pretty much deliberately took yesterday off, though; after cranking out just shy of 5000 words on Saturday, my brain was somewhat deflated. I do believe it's important to take time off and let things settle and regenerate a little.

But I went to my writers' group yesterday afternoon and I wrote those 300 words that actually included to some extent the prompt (not an every time occurrence; I ignore prompts on a regular basis). I was pretty happy with it, too, until I read it out loud. Then, it seemed all wrong. And I think my writers' group felt the same way: my words landed like a dead bird, thudding on the table. Sometimes the magic works, and sometimes it doesn't.

Posted by JeffO at 6:33 AM 7 comments: Links to this post

Email ThisBlogThis!Share to TwitterShare to FacebookShare to Pinterest
Labels: NaNoWriMo

Because NaNo (just under 13,000 words so far) is eating my brain, I'm even less prepared than normal for a Friday post. So I'm once again  turning to John Irving's interview in The Paris Review back in 1986:

"Reviews are only important when no one knows who you are."

Posted by JeffO at 6:07 AM 6 comments: Links to this post

Greetings, it's the first blog post of November. After me kvetching over unseasonable weather back in early September, we had a gorgeous autumn, with a great run of fall colors and pleasant temperatures. And yesterday came and I woke up to snow. It wasn't much--little patches here and there, more like ice pellets  that coated the roof of the car and left isolated little patches on the grass here and there, but a symbol of what's ending and what's coming. Well, it can't be stopped

We had one of the first of the lasts this weekend, as the Catbird said goodbye to her high school cross country career. On Saturday she and her team ran in the Sectionals meet. They did quite well, finishing fifth. The Catbird ran a good race, placing 38th overall out of 147 runners. Last night was the annual end of season potluck dinner. Coach always introduces the runners in little groups, hands them various awards/mementos (letters, patches, a photo book of the season). She definitely teared up a little bit when talking about the Catbird, who has been running with her for six(!) years. "She started as an adorable little seventh grader," said Coach, "and she's an adorable senior." And still little. It wasn't as emotional for me as I thought, but these moments will be piling up.

And the Magpie is doing very well. We're in the habit of Skyping with her at 9 a.m. Sunday morning, which is 10 p.m. Sunday night in Tokyo. Or, it was. With the switch back to Eastern Standard Time, we are now 14 hours behind, and she can't push her Skype session back an hour, so it looks like we have to get up extra early on Sundays. So much for sleeping in!

But she's having a good time, and has found a good mix of people to be with. When she was still over here and planning her year, she vacillated between living with a host family and staying in a dorm. I think she really wanted the immersion experience of a host family, but chose the dorm in the end, and I think that's a good decision. As it is, she's meeting plenty of Japanese people (duh, she's living in Japan), but she'd not beholden to the rules of a family, and she's also meeting a wider variety of people. Her friends include people from Finland, France, Denmark and Canada, and almost certainly more than that. And though she's been there now for two solid months, she says she still has these moments where she'll suddenly think, "I'm in Japan!" And perhaps I'm overstepping my bounds, but what the hey: she's keeping an intermittent blog that can be found here: http://adventuresatwaseda.tumblr.com/

(On a likely related note, I suddenly see a whole bunch of visitors to this blog from Japan--hello, Magpie!)

That whole time thing really messed me up yesterday.

NaNo update: over the weekend, I managed to put together 5,339 words. My manuscript has now passed the 100-page mark, though I found myself looking at a scene I wrote yesterday, thinking, "Have I gone off the rails a bit? Does this really advance the plot?" Doubt on, doubt on.

And some music. A little Grateful Dead (because I haven't done one of them in a long time) from a Halloween concert at Radio City Music Hall many years ago:


That's it for me--how was YOUR weekend?

Posted by JeffO at 6:46 AM 5 comments: Links to this post