On Friday, we went and picked up the Catbird at college for her college recess. It's nice to have her home. My wife figured it out, we're down to four more round trips to do this, maybe as little as two or three if we can get her to take the bus (taking the bus cuts more than half the time from our trip, turning ten hours of traveling in a day into maybe three). Four years goes fast. At any rate, I thought I'd take this opportunity to take a couple of weeks...off! My next post will either be on December 31 or January 7, depending on how I feel. Or, I could post next week. You never know. Whatever I choose to do, I hope all of you have a lovely couple of weeks and enjoy the holidays!
Posted by JeffO at 8:32 AM 8 comments: Links to this post

"I think there's a play there!"

Monty Python's Flying Circus once featured a skit in which a well-dressed, professional looking young man named Ken (Eric Idle) returns to the home of his parents, where he receives a warm welcome from his mother (Terry Jones), but hostility from his father (Graham Chapman). What starts out looking like a tale of a college boy coming home to his working-class parents is quickly turned on its head, as Ken is a coal miner, while his father is an award-winning playwright and novelist. "There's nowt wrong with gala luncheons, lad!" sneers the father. "I've had more gala luncheons than you've had hot dinners!" The father suffers an attack of writer's cramp and kicks his disgrace of a son out, and then--the punch line: "I think there's a play there!" 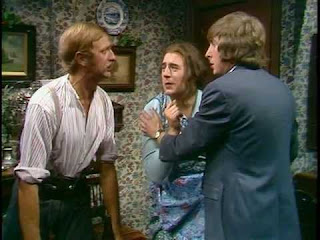 It's the blessing and the curse of writers to see 'the play there' in all kinds of situations. A few years back, while driving through a hurricane to pick the Magpie up at a friend's house, I watched a normally placid creek boil through a culvert, and I asked myself, "What if I couldn't get to the house to pick the Magpie up?" This question was followed by opposite, but equally compelling thoughts: "That would be horrible!" and "Ooh, that might make a good story!"

Since I was actually able to pick up the Magpie and get her home safely, it was a case of 'no harm, no foul' and I was able to let my imagination run wild over the scenario I had imagined. And it was a good story. But sometimes, it's not always 'no harm, no foul.' One of the first ideas I ever had, though one I did not see to completion, as I wasn't seriously writing then, came about after hearing about two different, but related stories: one was a radio interview with the director of the Southern Poverty Law Center about the rise of hate groups, and the other was a particularly chilling story of a midwestern militia group that was planning on killing a state trooper, then ambushing the funeral. Pretty horrible stuff, but potentially the basis of a good story (and one that keeps coming back to me).

At the end of last week, I learned that a local man, someone I know through the school system, someone who was the Catbird's track coach for two years in middle school, someone about whom I would say, "He's a good guy!" was accused of a pretty nasty crime. You don't want to believe it when it's someone you know, when it's someone you think of as "a good guy." Hoping that it was some kind of mistake or misunderstanding, I found the criminal complaint attached to an online story. Innocent until proven guilty, yes, but this seemed pretty damning, and disgusting. And yet.

And yet, even in all of that, I find that Monty Python punch line coming back to me. "I think there's a play there!" There is, of course. There's a story there, in this man's crime; in its impact on his family, on the community. There's also the story of the victims, and the detective who discovered it. I don't know if I'd ever use this local man's crime as the basis of a story or not. It might never feel right, either due to the nature of the crime or because it's too close to home, but the story's there, just as there's a story in pretty much everything we see around us: the mother and child at the bus stop. The old woman who meticulously rakes her lawn every morning. The fender bender at the gas station. There's a story there. In fact, there are myriad stories in every instance, it's just a matter of which part of it we choose to tell.

Posted by JeffO at 7:00 AM 2 comments: Links to this post

I actually had some partially-written posts going, but when my alarm went off this morning I turned it off--then woke up forty minutes later and ended up short of time. I've had my alarm clock for probably twenty-five years (seriously!), maybe more, and I still never hit the snooze button. I always swear I'll get up in a few minutes, and usually, I do. I must have been a little tired. Anyway, on to today's post. Be  warned, there may be mild spoilers for Stephen King's Elevation ahead. Not like I give away the ending or anything.

I don't know what surprised me more: Finding out in early October that Stephen King had yet another book coming out in 2018, or finding out how very small it is. Seriously, when my librarian handed it over to me last week (first one to read it, too!), I almost asked, "Is that all there is?" King's last two books, Sleeping Beauties, co-written with his son, Owen, and The Outsider clocked in at 702 and 576 pages, respectively. Elevation is, by contrast, a slip of a book, a novella, really, of just 146 pages, a book that can fit in one hand and is barely thicker than that hand (pretty cover, though).


Elevation is the story of a middle-aged man who finds himself inexplicably losing weight--with a catch. When the story opens, he's already dropped 28 pounds, but he looks exactly as he did when he was weighed 240. As his weight continues to drop, at about two pounds a day, there is no change to his outward appearance. The book hearkens back to King's 1984 novel, Thinner (written under his Richard Bachman pseudonym, in which an obese lawyer loses weight uncontrollably after being cursed) and Richard Matheson's The Shrinking Man, in which a man shrinks by 1/7" a day. In fact, Elevation's protagonist shares the same name, Scott Carey, with the hero of Matheson's book, and the dedication for Elevation reads "Thinking of Richard Matheson." King wears his influences on his sleeve. (NOTE: I now find myself wanting to re-read both Thinner and The Shrinking Man)

It took me about a day to read, and the surprises kept coming, though. For the first time in a long time, I found myself wishing that the book was longer. That's not something I've said about a King book in a while. Now, for the record, I like long books--when they're good. King has put out some really long books (1138 pages for It; 1074 pages for Under the Dome), and I mostly really enjoy them. But both Sleeping Beauties and The Outsider felt way too long for me, full of extraneous characters and too much...well, something. Elevation has none of the bloat, but I found myself wanting more backstory for our main characters, more of the sketches of small-town Maine and the quirky folks who live there. Not this time.*

But the thing that surprised me the most? Unlike Thinner, or even The Shrinking Man, Elevation is suprisingly optimistic. King is well-known for torturing his characters, for putting them through the wringer, for always asking himself, "How can I make things worse for them?" Here, however, the worst thing happens in the first ten pages. King's version of Scott Carey quickly accepts what he thinks his fate will be, and unlike Thinner's Billy Halleck and The Shrinking Man's Scott Carey, King's Carey actually seems to gain from losing: he gains perspective on his own life, and on that of his beloved town of Castle Rock.

Over at Stacy's blog last week, Stacy asked me what genre I thought Elevation fit into. It's clearly not horror. Nor does it fit quite into fantasy. The phrase that came to my mind was "magical realism," even though there's no magic in the traditional sense. Thinking about it some more, it almost has the feel of a fable to me, so that's what I'll go with.

I'm kind of lacking a concluding paragraph here, so I'll turn it over to you: Have you read Elevation? What did you think of it? Have you ever been surprised by something an author did in a book the way I was surprised by Elevation? Please share, and thanks for reading!

*In hindsight, given the style of book, its length is probably a good thing. If King started coloring in the back pages in his typical King way, it might have shifted the narrative in a direction he didn't want to go, maybe even turned this into more of a horror or science fiction novel. Keep true to your vision, Stephen!
Posted by JeffO at 8:20 PM 8 comments: Links to this post