Each year, our local high school holds its graduation ceremony at one of the loveliest sites in the area, a sloping sweep of lawn overlooking the lake. For the 12 years we've been here, I can't remember a day when the weather is bad--not that we were in the habit of attending graduation, mind you. When the Magpie took the walk, it was sunny and hot. Last year, when the Catbird had to be there for the ceremony as an usher, it was sunny and REAL hot. To my understanding, they haven't had to go to Plan B--holding graduation in the high school auditorium--in our time here.

Yesterday, they nearly had to go to Plan B. It rained Saturday afternoon. It rained Saturday night. It rained (heavily) Sunday morning. By the time we took Catbird up to the school at noon to get ready, it was still raining. But the weather service radar showed a hole in the clouds and the hour-by-hour forecast showed a window of non-rain. Apparently it was the students of the Class of 2015 who made the decision to go on with the show.

When we got to the site, the rain had turned into a mist. By the time the school buses arrived with the kids, it had stopped completely, and while the sun never really came out, it tried, and the day warmed up enough to be comfortable (except for the occasions when the wind blew), and it was fantastic. I am proud of my girls, and as much as I lament in a way the passing of this era, I look forward to the next one. We've already seen remarkable changes in the Magpie, whose self-confidence has soared in the last three years (and particularly the last 10 months when she's been living in Japan); now it's the Catbird's turn, and I can't wait to see her continue to grow.

This last week we spent a lot of time around the kids and parents of the Catbird's classmates. Some of them, like us, watched their last child graduate this year. Others have one, two, three or more to go. I find myself wondering how our relationship with these people--and with the community as a whole--will change. So much of our lives is centers around our kids and their lives. It always will, I suppose, but now the focus is a little different. Onward!

Email ThisBlogThis!Share to TwitterShare to FacebookShare to Pinterest
Labels: change, life in general 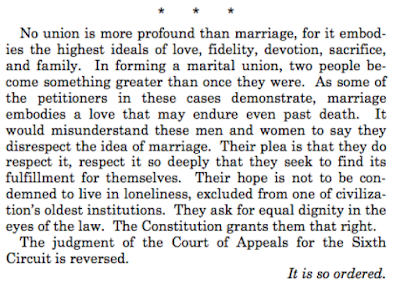 Have a nice weekend, all.

The title says it all.

Over the last two weeks or so, I've re-discovered the joy of pushing and working on writing in the short hours before I have to leave for work. Since the Catbird's last day of school was one week ago (though, she doesn't graduate for another 6 days, since all the non-seniors are encumbered with the wonderful thing called "Regents exams"), I don't have to worry about making sure she gets off to school in the mornings. No lunch to pack, no need to march up the stairs every 15 minutes and pound on her door. So that leaves me some time in the morning to drink coffee, sift through blogs, and write. It's not a lot of time, but it's amazing how quickly I can wake up, and how much I can get done. Even with all the craziness of the last couple of weeks in terms of school-related things (dinners and banquets and awards and baccalaureates), I'm on track to turn in my manuscript to Carrie by the end of the month.

On Friday, just as I stepped out into the driveway on my way to picking up the Catbird at her job "in town," a storm hit. A wicked streak of lightning landed to the right, on the other side of the hamlet. A moment later, another one landed somewhere over the hill across the street, and a cloud looked like it was boiling up and over that hill. The rain came, and the entire 15 minutes or so on the road into town I was treated to one of the most spectacular lightning shows I have seen in years. By the time we arrived home, the storm had slackened, but the damage was done: my wife and her friend who had come over to binge watch something (they hadn't decided on what to binge watch when I left) were sitting in candlelight. The power was out.

You may know that I've written a novel called POWERLESS, which deals with a world after the power goes out. As the outage stretched on, I thought of that story. In it, the main character has a landline, a real old-school phone hardwired to the wall, with an actual cord that connects the handset to the rest of the device. An old-school phone like that is pretty handy in an emergency, because it always works. They operate independently of the power grid, so when the power goes out, you can always use it to notify the power company of an outage (and, in our case, the automated voice on the other end of the line will tell you how many customers in your area are out, and give you an estimate of when it should be back on--which can be a fast-moving target). It's pretty good to have (note that cordless phones will not work in a power outage, because the base unit doesn't work unless it's plugged into an electrical outlet).

Sometime on Friday, I noticed my sister posted a note on Facebook that said her family no longer had a landline. Presumably, she, her husband and both sons have their own cellphones. She joins a growing number of Americans. According to the Chicago Tribune, more than 40% of Americans no longer have landlines. That story ran last summer, so it's probably even higher now. I'm not sure it's such a good idea, just from a safety perspective, thought that could be just because we exist in a cellphone dead zone.

I wonder how the switch to individual phones changes the family dynamic. Growing up, we had two phones in our house, but only one phone line. My parents did not get an answering machine until long after we kids were moved out. Calling home could result in a busy signal--and there's an entire generation of Americans that likely have NO IDEA what that is--or, if no one was home, the phone ringing and ringing forever. There was nothing worse as a teenager than waiting for an important call (and, when you're a teenager, they're all important, aren't they?) while your sister is hogging the line. Now, there's no need to fight over the phone. And as a parent, do you have any idea who is calling your kids? Or when? Devices bring us together, devices keep us apart.

On another note, today is the day. I don't know if other high schools do this--I don't think mine did, but we had 1,000 students to deal with, so probably not--it's the Senior Walk, or as I think of it, The Running of the Seniors. Today, last period of the day, the seniors at the Catbird's school will don their caps and gowns and parade through the halls, accompanied by the cheers of the underclassmen and the tears of gathered parents. It's been a heck of a year, not always in a good way, but she is officially done. I am super proud of her, super proud of both my girls, and I can't wait to see where life takes them from here--and my wife and I!

That's about it for me, have a great week, all.


Note on the phone: the one in the picture is very similar to the one we used to have on our kitchen wall where I grew up. My Mom had a cousin who worked for the phone company who got us an extra long 'strangler cord' so we could have privacy. My bedroom was at least ten feet down the hall from the kitchen and I could stretch that sucker so I could stand inside my closed door to talk to my friends. Woe to anyone who was in the bathroom when I was on the phone. If they came out the door without looking, the cord would be stretched across that doorway, throat high. Good times.

Is it me or does it feel like social media--that great, wonderful tool that is supposed to bring us all together--is becoming more and more divisive?

Maybe it is me. Maybe I just don't like people screaming their political beliefs at me (particularly when they don't jibe with my own, hah ha), or trying to get me to "guilt share" some image or message or status. "Share this if you support..." with the implication being that I'm anti-American or anti-cop or anti-equality or anti-choice or anti-life or anti-feminist if I don't do it. Don't tell me what I am just because I didn't change my profile picture to support your cause, or because I didn't share a status or image or do the Ice Bucket Challenge.

Rant over. Damn, I'm feeling like some cranky old man. Here's some depressing (but incredible) Pink Floyd to cap this post off a on a real cheery note!

A couple years back, when writing was still an idea, something I toyed around with for a bit, I was on my way into town on a fine Saturday morning in early June. The sun was shining, it was warm, the windows were down and I was grooving along. I'd had the idea of a story in my head for months, but I'd never gotten beyond the "Wouldn't that be kind of cool to write about?" stage.

We live in an area with winding, hilly roads. I descended a hill into a little valley, rounded a curve, and there it was, sitting at the edge of the road, just outside the white line: a monstrous snapping turtle. She stared at my oncoming car with that calm, defiant look that all turtles have, her huge head raised up,, and then I was past her. When I glanced in the rear view mirror, her tail was dragging behind as she disappeared into the high grass at the edge of the road. And that's when I had it: the moment.

The whole way into town I was writing in my head. The whole way home I was writing in my head. When I got home, I sat down and wrote a chapter, the opening of a book that soon fizzled and died. I wasn't ready. It wasn't until the following November that I started it again, for my first NaNo. That book never went anywhere, really, not beyond the required 50,000 words, but that moment has stayed with me. And every time I see a turtle on the road, it comes back to me.

It's June. Here in upstate New York, it's pretty much peak time for turtles on the move, especially females who are either on their way to or on their way from egg laying sites (the one pictured below I came across a few years back, laying eggs in the gravel on the road side). Sadly, turtles are not too good at avoiding cars. The shell that makes them so good at avoiding most predators is not much uses against a 2-ton vehicle. If, in your travels, you should find a turtle in the middle of the road and it's safe to help it, do so. But please make sure you move it in the direction it's heading toward. Turtles are stubborn, and turtles know where they're going. Save a life!