Yesterday morning, I spent a couple of hours drafting a couple of ideas for a post to run today. They weren't quite complete posts, though, because they never are. Even when I really, really work at pre-writing a post, when I sit down on Monday morning to get it done here on the blog, it's never as simple as a straight cut-and-paste job, or just retyping in the blog box what's in the Word box. No, the Word document tends to be a guide, and it takes a surprising amount of brain power to go from even a pretty good draft to a finished blog post. Well, here's where my brain power is at these days: 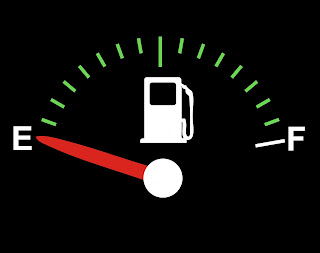 It's been like this for a while now: posting is never easy for me, but it's become increasingly difficult and that means it's time for a break. I was kind of thinking the entire month of April, but, well, last week was easy. And then you need a post saying it's break time, right? So, here's the official "I'm on break" post. I'll still be around, will still be visiting the blogs I usually visit, I just won't be posting here.*

I should also point out, it's not just the blog. For the last couple of weeks, I've been kind of dragging, my energy levels pretty much bottomed out. I suspect at least some of it is weather related: after having 60 degree weather in the middle of February, March has been shit, quite frankly, and April has not been much better, with limited sunshine and persistent, irritating snow. It's ten degrees outside right now. Ten! On April 9th!

At any rate, it seems like a good time to take a break, and recharge the batteries. The nice thing is, I've got a mini-vacation coming up at the beginning of May, one that is much needed, because April starts the crazy-busy season at work. I'll be back in mid-May, and I'll see you around the blogs in the interim. Enjoy my break!


*Which of course means in a week's time or so I'll have a burning, gotta post it now moment

Email ThisBlogThis!Share to TwitterShare to FacebookShare to Pinterest
Labels: blogging

Howdy, folks. Can't believe we're already in the fourth month of 2018--time is flying! So, here's the list of what I've read so far:

The Education of Dixie Dupree (2016), Donna Everhart. I feel like I know Donna from around the blogosphere. I enjoyed this book, in as much as you can be said to enjoy a book about a girl dealing with sexual abuse from an uncle.

The Girl in the Spider's Web (2015), David Lagercrantz, translated by George Goulding. Shortly after starting, I realized I had never actually read the third installment of Steig Larsson's Millennium series, The Girl Who Kicked the Hornet's Nest. It didn't impact the reading of this all that much. I enjoyed the first two, mostly, but this was a battle.

The Woman in the Window (2018), A.J. Finn. Agoraphobic alcoholic woman spies on her neighbors. Reminiscent of The Girl on the Train, yet not derivative. I blew through this one in about 24 hours.

The Great Alone (2018), Kristin Hannah. This felt a little too YA at times for my liking. Nothing against YA, but it's like taking a drink from a glass thinking it's Sprite and finding out it's club soda instead.

Hey, how about that--not a single Stephen King book in the mix!

I feel like there might have been another book between At Heaven's Gate and Stone Arabia, but I can't remember what it was. Nine books in three months is perhaps a little slow; my reading definitely tailed off in March, for reasons I can't explain. (Bruins too busy, perhaps? They've played literally every other day since around March 2, except for the weekend, when they played both days.)

-Had an unusual dinner yesterday in which we Skyped the Catbird in from college. Set the laptop up on the end of the table and chatted with her while we ate. It was very futuristic in a 1960s kind of way.

-Last week during a program, I declared the end of winter. Thursday and Friday, I noticed actual, new green poking out through the mud. Yesterday, we had a dusting of snow. Right now, it's about 28 degrees outside. This is upstate New York in April. It's coming, but sloooooooooooow.


That's it for me, what about you? What have you been reading lately?