Hey, remember this? J.K. Rowling wrote it in Harry Potter and the Goblet of Fire: 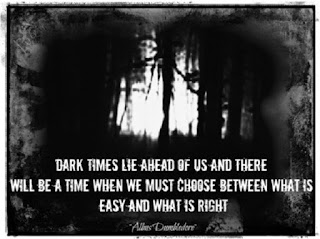 Well, I think those times are here.

Throughout the primary and campaign season, our President bashed America up and down, calling it a Third World country because the airports are crap, and you can't walk through a city without getting shot, and on and on and on. Well, as I look around the news today, I see a President signing Executive Orders that might actually be illegal; staff at some federal agencies "going rogue" on social media in an effort to keep actual facts and information flowing; other federal agencies ignoring rulings from the courts. The President is churning out Executive Orders that do not appear to have been given any thought at all, acting less like any President we've had and more like a Middle Ages monarch. In other words, we're starting to resemble the Third World Countries he was likening us to on the campaign trail.

But hey! The market is up! 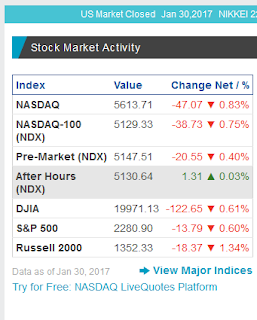 
This is the game, folks.

In case you missed it, the day after his inauguration, President Donald Trump's Press Secretary, Sean Spicer had has first press conference--and he spent a good portion of the time lying about the size of the crowd at the inauguration and telling the press what they should report and how (essentially, "anything that makes us look good, and as favorably as possible"). On Sunday, Kellyanne Conway, whose job title I don't know, went on Meet the Press and basically controlled the interview and pretty much owned Chuck Todd, drawing the above quote from Todd.

This is the game of the administration, folks. This is what we have to look forward to. The point of attacking the press is to change the narrative. While Spicer is berating reporters at a press conference, while Conway is running rings around Todd, while Trump is snarking at the huge turnouts at women's marches across the country and around the globe, no one is asking the big question, the most important question: "What are we not talking about while we're arguing over inauguration attendance?"

A skilled magician works by misdirection. Even when we know to watch for the ball disappearing into or being pulled from a pocket, it's amazingly hard to see. And it's fun to watch. But not when it's the office of the President of the United States. Keep watching, and don't take the bait.

Annnnd here we are again. I have the day off, I've spent the last two plus hours working on this damn resolution post, and I've decided it's time to pull the plug on it yet again, because I have other things I want to work on today--like the WiP. I suspect part of my problem is that some of the post will look a bit like trashing another writer, which I am loathe to do, because a) who am I? and b) I just don't like to trash anything. Instead, we get another fluff post about the weekend and a little bit of music.

Writing: The WiP is progressing. Currently around 130 pages and 35K words, I like where it's going. I did slow down a bit at the end of last week, as I was not feeling well, but did have a good day yesterday.

Weekend: Took the long drive to bring The Catbird back to college on Saturday, she starts classes today (no MLK day for her!). We enjoyed having her home, and the house is very quiet, despite the fact she's a quiet kid. Spring break is only eight weeks away!

Parental boasting time: The Catbird nailed her second straight semester of straight A's. I think first semester freshman year she got one B+ or A-, so she's rocking a pretty damn good GPA. The Magpie finished her own four years with something like a 3.98 GPA. Smart kids!

Weather: We're riding a roller coaster for January. First week was kind of warm; then it got kind of cold; now it's kind of warm again. We had really heavy rain and 50 degrees last Thursday, so pretty much all the snow is gone.

Music: I'm gonna go all hipster here and say I liked The Clash before it was cool (i.e., before "Rock the Casbah" and "Should I Stay or Should I Go" were big hits). This song, from their excellent London Calling album, actually helped me answer a Trivial Pursuit question many years ago!


That's it for me for now. What's going on with all of you?

Email ThisBlogThis!Share to TwitterShare to FacebookShare to Pinterest
Labels: Musical Monday, The Clash

Well, after extensively drafting my post on Resolution, then running out of time this morning, and spending the last hour post-dinner on it, I've decide to...

Yeah, it's just one of those days. Maybe next week.

For those of you looking for an agent, Agent Carrie posted a little quiz on her blog this morning, a sort of "compatibility quiz." Pop on over there and see if she might be for you! For the record, I scored a 76. Yeah, definitely one of those days! And, if you're interested in the fine art of the query, check Carrie's blog tomorrow, I think she may be doing a query critique!

Good morning, and Happy New Year to all of you! I hope you had a good--and safe--celebration, and I wish you the very best for 2017.

I have a thematically-appropriate post on Resolution drafted, but it's not ready enough this morning and I'm not prepared to craft it into perfection this morning; instead, I give you my final reading list for 2016.

FOURTH QUARTER READING LIST (In the order read, with or without commentary):

The Death and Life of Dith Pran, Sydney Schanberg (1985). The tale of Dith's survival and eventual escape from Cambodia makes for some harrowing reading.

All the Light We Cannot See, Anthony Doerr (2014). I wish I'd written that! Seriously, this was a book I could not put down. My wife's book club ended up reading this for December, and I belive they were unanimous in their enjoyment of it.

The Tea Party and the Remaking of Republican Conservatism, Theda Skocpol and Vanessa Williamson (2012). Hmm, I seem to be developing a trend in my reading here, between this and the Schanberg book. This one was related somewhat to my current project, which in turn has been influenced (I'm not sure inspired is quite the right word) by developments in American politics (and, I should add, in much of the rest of the world, too). I did learn something from this book, though I found it a little difficult to get through.

The Girls, Emma Cline (2016). One of the most-hyped books of 2016, it was good, but I felt a little let down by it. I'm not sure I ever really loved the main character enough, though, which may explain some of my disappointment.

All the Ugly and Wonderful Things, Bryn Greenwood (2016). And we have a winner for "Most Uncomfortable Subject Matter, 2016!" Greenwood dares to go there as she traces the growing love between a man and a very much younger girl, set against a life lived with drug dealers and users. In this case, "there" is them having their first sexual encounter when the girl is thirteen. Despite the high squick factor--or maybe because of it--I enjoyed the book, and applaud Greenwood (and her publisher) for taking chances.

At the Water's Edge, Sara Gruen (2015). Finished on Christmas Eve. This book will factor into that post on resolution I mentioned at the top. This also raises a question that can be explored some other time (or, I guess, you can answer below): Is it better to have a smash hit right out of the gate that all of your future work will be compared to, or to have modest success that builds over time? This book has a lot of flaws, but even when I read positive reviews (after the fact; I almost never read reviews before I've read the book), most people insisted on comparing this one to Water for Elephants.

Extinction, Mark Alpert (2013). Techno-thrillers are not my thing, and though I know some of the technology Alpert employs here (retinal implants, prosthetic devices powered by thought) are real, I found some of it to be a little too much. Not a bad read.

So, that's the list for the fourth quarter: Eight books read, six fiction, two non-fiction. My reading fell off a bit; this was the lowest number of books read, and the second time this year I read less than ten books, the other being the first quarter of the month. Schanberg's book also was extremely short, maybe 85 pages.

The total for the year: 42 books read. 37 fiction (including one play), five non-fiction. In a couple of weeks I think I'll talk a little more about the reading list and some things that interest me from my selections.

Oh, one last thing: I'm not usually good at playing favorites, but people usually want to know, so...Hmmm. If I had to pick the top three books I read this year (not counting re-reads), I would go with...The Water Knife, by Paolo Bacigalupi, NOS4A2, by Joe Hill, and All the Light We Cannot See, by Anthony Doerr.

That's it for now, what about you? What books did you enjoy this last year? See you next time!