The late Senator John McCain was not a perfect man. No one is. He may not even have been quite the maverick we all believed him to be (McCain voted with Trump 83% of the time, which included greenlighting all of Trump's cabinet-level picks, except for Mick Mulvaney (McCain voted no) and the disaster that was Scott Pruitt (no vote)). Still, John McCain was a man of honor, a dedicated public servant, and a fundamentally decent human being. He will be missed, especially now, in this time of poisonous politics.

In the wake of Rudy Giuliani's statement this weekend that "truth isn't truth": * 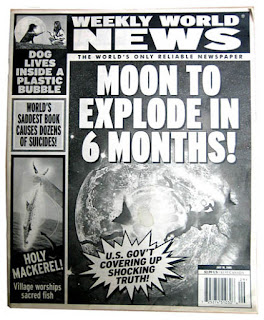 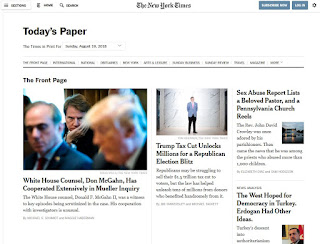 *Link is to the entire interview. Fast forward to 9:00 for the "truth isn't truth" section.

Posted by JeffO at 7:00 AM 4 comments: Links to this post

An End of One Thing

Just about three years ago, I was fortunate to begin an unpaid gig writing a monthly column for one of the weekly newspapers in the county. We're fortunate here, to have no less (fewer? I can never remember the proper use) than four newspapers in our county, despite being a decidedly rural community. One is a daily, and three are weeklies.

My previous boss was an ex-newspaper person herself who had once been the editor-in-chief for one of those weeklies. She knew I liked to write, she knew that the papers always like to get content when it's written for them, and she knew that it was a good opportunity for our organization to raise its profile by getting a column with our name on it. So in a way, I was actually getting paid to write, just not by the newspaper. So, for the last three-and-a-half years I struggled mightily once a month to find something relevant to write about, to make it relevant to my job without it seeming like pure party propaganda, and to make it interesting to the community.

At first, I felt a little like I was screaming into the void (sadly, that website, launched by John Oliver, is now defunct). I opened with a column on lightbulbs, of all things, and how New York State laws would be requiring a phase-out of incandescent bulbs for most household applications in favor of higher efficiency compact fluorescent and LED bulbs. Exciting stuff, right? I wrote a lot about recycling, because there's so much confusion, but I also wrote about invasive species, water quality, pollinators, ticks and, in what might be my favorite column, an homage to goldenrod (which, in my little corner of the world, is now blooming, which makes me happy and a little sad at the same time). Over time, I found something strange: people were reading.

It's nice when someone drops a comment on this blog, nicer still when someone (or several someones) regularly drop comments on this blog. It's nice to know that people are actually reading these words and find something to say about them, and that you're not all a bunch of Russian bots crawling over this site for reasons I can't comprehend. But it's even nicer when the cashier at the local Price Chopper says, "I really like your column" and tells you about her own battles with customers and corporate over the plastic bag recycling program stores are required to have, or when a respected doctor e-mails with advice on solving a problem I griped about by improving signage, or when the crusty old scientist on my board praises my column on ticks because "most of the time, it's 50% bullshit," and he doesn't mean my column, he means what you normally read about ticks. It's nice, but it's also a little scary.

Sadly, about a month ago, I received an e-mail from my editor at the paper for the last three years, informing me that he was stepping down. The nationwide conglomerate that owns both the weekly and the daily paper decided that it was cutting the size of the weekly in half. My editor was going to be forced to work out of an office half an hour away and was going to be reassigned as a reporter if he decided to stay. He was not staying. He was also not sure if there would be room for his columnists anymore. Turns out, there isn't.

Writing that column, roughly 700 words a month, was rarely easy. I missed deadlines, pushed deadlines up to the limit, but it was a great experience overall. I will miss it, but maybe we will take my wife's advice and recast it as a blog on the company's website. It might lose some of its cachet, but will keep getting the word out. We shall see.

Why is this song stuck in my head? Who knows? "Doing That Rag" from the Grateful Dead's 1969 album, Aoxomoxoa (Yeah, I don't know what that means, either, or how to say it). This is one of the few songs that was actually better on record than live. Enjoy your week!

Email ThisBlogThis!Share to TwitterShare to FacebookShare to Pinterest
Labels: writing

A couple of days ago, my wife and I were coming home from...somewhere, I don't remember where, exactly. As we came down the road in front of my house I looked up my graceful sweep of overgrown lawn and sat up a little straighter, alarmed by something out of place amidst the ragged grass and weeds: the plastic mesh cage surrounding the chestnut tree had been knocked on its side.

I haven't provided an update on the Famous Chestnut Tree since the end of May, but it was doing quite well. It was definitely in the closest thing to the "leap" phase of the "sleep, creep, and leap" cycle that my botanist board member who used to work for a nursery told me about (i.e., when transplanting trees and shrubs, expect it to take about three years before it really starts growing). While the Famous Chestnut Tree wasn't a threat to reach 20 feet tall this year, what was taking over as the new trunk had put on substantial growth this year, and spawned an additional side branch.

That picture was taken May 28. Just to the left of my pinkie is a bend in the trunk--everything above that bend was this year's growth. Leap, indeed.

As I ran out to check on the Famous Chestnut Tree, I hoped and hoped that the cage had just been knocked over by wind, though I did not really believe this. While we had some massive periods of rain last week, they were calm affairs: little thunder, little lightning--and pretty much no wind.

It was not the wind. This is what I found when I got to the tree (and I apologize, I can't seem to make my camera focus on the tree, so it's a little blurry; but you'll get the picture):

Who dunnit? The culprits are likely one of three: rabbit, deer, or woodchuck. My money is on deer. I'm guessing the opening at the top of my plastic mesh "sleeve" was far too wide and some deer stuck its head right in, knocking the whole thing down. Looks like I need to up my security game a little.

Annoying, but not an end to the Famous Chestnut Tree, not yet. Not clear on the photo, but there are a couple of leaves left (small, yes, but still there), and there are already buds in place. Trees are resilient; I'm confident this one will just get stronger.

I've let work on the WiP slide a little bit this last week, though not entirely. I've been participating in The University of Iowa's Moving the Margins: Fiction and Inclusion MOOC. It's a bit of a struggle to keep up, but I'm hanging in there, and I think it's going well. I have been using parts of the WiP in class, and I'm hoping it will help. I've read some fantastic short stories as course reading and I've received some excellent critiques on my assignments (and, hopefully, given some). The discussion areas are still a little clunky, but overall, it's been a positive experience so far.

That's all for me; how's everything with all of you?
Posted by JeffO at 6:49 AM 6 comments: Links to this post