How Do I Work This?

Going back to work after a long layoff is tough, isn't it? I was last in the office on Monday; Tuesday was travel day to pick up the Catbird (about 9 hours of driving round trip, plus having to eat, plus she had one last class so we had to find some errands to do for an hour and a half, made for a long day). I had given myself the option of going in on Wednesday, but decided to skip it: there was plenty to do around here, I was tired, and I did not expect a whole lot to happen anyway. I have been in the office the day before Thanksgiving; nothing ever happens. Thursday and Friday for the holiday, then the weekend, and now? Wow, I really don't want to go in today!

Strangely, that's about how I feel about blogging today, too. While on the road yesterday, I thought about this post off and on; but now that I'm sitting down, drinking my coffee, trying to psyche myself up for the day, I feel like it's been far longer than a week since my last post. I feel like I've completely forgotten how to do this (maybe I never knew!). Holidays can do that, I guess.

Despite all the driving, we had a real nice time, and it was good to have the Catbird home for a few days, was nice to hear her and the Magpie being silly together. Nice, also, to know that we get to do the trip again in about three weeks, and that she'll be home for a month this time. We were fortunate that we caught a break: From Saturday through Monday evening, we ended up with about 8 inches of snow here; on Tuesday, the roads were (mostly) free of slop and slip, and once we traveled about 30 miles east, we found that there had been little to no snow, which made for good travel. Hopefully, we'll catch a similar break in December.

The RiP progressed nicely. I had hoped to be sending it back off to Agent Carrie this morning, but I fear it's not quite there. I have one small (I hope) portion of a chapter that I'm writing fresh to insert; three pages, give or take, but it's not quite there, frustratingly close. I spent a lot of time on it over the long holiday weekend. Not much time to do anything with it this morning, but maybe I'll be fresher later. After I hook up one of these bad boys: 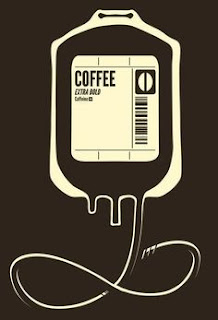 That's all I got for today; how are you all?
Posted by JeffO at 6:26 AM 6 comments: Links to this post

Monday Musing: And There It Is!

Good morning, all. Various bits and pieces of brain drivel from me:

After pushing sixty degrees on Friday and Saturday, the temperature dropped, dropped, dropped. Drizzle on Saturday night turned into snow on Sunday morning, which hasn't stopped yet. Plows are busy, and I will soon be busy as well, shoveling out the driveway (again). Looks like I'll have the chance to try the 4-wheel drive out again today.

Had a pretty good weekend of work on the RiP. The WiP is pretty much dead in the water*, but I might actually be able to make good on my goal of delivering the RiP to Agent Carrie by the end of the month.

*Not entirely true. I've written all of 560 words this month (to 'win' NaNo, I'd need to average 5,493.33 words per day between now and the end of the month--yeah, not gonna happen!). BUT parts of the WiP have been rattling around in my head at odd hours, which is a good sign. I think I'll be able to pick it up right away once I've put away the RiP.

Tuesday is our travel day, when we head out to pick up the Catbird for Thanksgiving. The weather is looking as promising as can be so far. On the other hand, we have to drive through about five colors to get there!


My brain is proving to be a little empty at this hour, on this day, so I will leave you with that. To my American friends, happy Thanksgiving! May you have a lovely holiday filled with family, good friends, and good food! To everyone else--have a great week, and thank you to all of you who take the time to read and share your thoughts.

Posted by JeffO at 6:28 AM 5 comments: Links to this post

My Last Word On The Elections (for now)

This goes out to the Trumpites out there:

For the last sixteen months or so, you've been supporting Donald Trump, and it must have been frustrating for you, a thinking, feeling person, being painted with a very broad brush because of your choice of candidate. You were voting for Trump because you didn't like Hillary--but not just because she's a woman. You didn't like Hillary because she represents more of the same, and you don't feel the Democrats were leading us to a very good place. You don't like Hillary because of her Wall Street ties. Or because of her e-mails. Or Benghazi. Fine.

Or maybe you're a business owner, or a top earner, and you were not looking forward to yet another round of tax hikes on your income bracket. Or you are not confident in Hillary's ability to get us out of the Middle East and end the threat of ISIS. Or Russia. Maybe you're from coal country or gas country or oil country and view the push to renewables to be a threat to your livelihood and were fighting to keep your job. I get that.

And I get that it must have been frustrating over these last sixteen months or so to constantly have friends and relations on social media calling you a racist, a bigot, a xenophobe, a homophobe, a misogynist. The memes that were all over the place basically equated your choice for president as a Mussolini, a Hitler--and, by association, they lumped you in there, too.

"I am not those things," you said. You were not one of those people chanting "Build the wall" at Trump rallies, or "Lock her up." You were not one of those people throwing punches at protesters, or spitting on them, or calling people who looked like they might be from south of the border "beaners" and telling them they'd soon be deported. That wasn't you. The thing about politics is there's no such thing as a perfect candidate. They all have some kind of baggage, some position that we do not like, and that forces us to prioritize, make choices, and live with things that make us uncomfortable. Maybe you're not comfortable with things Trump has said (and done) in the past, but you really feel like the nation is being strangled by over-regulation, and Clinton sure isn't going to cut any of that back. So you put up with the bad stuff and say, "That isn't me. I'm not like that."

And now it's time to prove it. Your man is president elect. In two months, he'll take the oath of office and he'll have a semi-friendly Republican majority in Congress at his back. And sometime in the next year--more likely, within a few weeks of taking office--something's going to come out of the White House. It may be a proposed law. It may be a program. It may be a plan. Whatever it is, it's going to tick off one or more boxes: racist. Misogynist. Discriminatory. There's no telling which group it will target. It will almost certainly be gussied up as some kind of action that will keep our borders safe, or boost the economy, or limit voter fraud, but it will be definitely targeted at a group and close inspection will reveal it for what it is. And that's when you will have to prove that you are not those things people have been saying you are.

I hope you do.

Posted by JeffO at 6:24 AM 9 comments: Links to this post 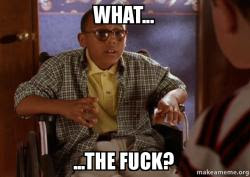 Went to bed at one last night, the buzz from a shot of vodka and a White Russian not able to sufficiently dampen the bewilderment of what I had been watching unfold all night on the election map, or quiet the anxiety building over the prospect of a Trump presidency--and Republican control of both House and Senate. The math was not adding up, and that was even before Pennsylvania flipped from light blue to pale pink.

I went to bed hoping it was wrong, hoping that the late tally of ballots would be in Democratic stronghold precincts, while also knowing that a deficit of thirty, forty, fifty thousand votes is a lot to overcome. I went to bed hoping I could wake up in the morning, look at the results, and say, "Whew, that was a little dicey there." Instead, I wake up and wonder how President-elect Trump will behave, how he will  govern, whether he'll squander his majority by attacking the senators and representatives who didn't support him wholeheartedly throughout, whether he'll follow through on his promises to sue  the women who have accused him of sexual assault, whether he'll actually ultimately launch (more) investigations into Clintons e-mails and throw her in jail. I wake up and realize that I'm actually going to have to put into practice--somehow--Stephen King's words I posted here on Monday: "he's not just the president but my president." A good line, but it sure don't taste too good right now.

A Last Word Ahead Of Election Day

It's nearly over. At least I hope it is.

Tomorrow is the day we here in the United States officially cast our ballots and choose the next president. Though the events won't be offically official until January, when Congress counts the electoral votes, God willing, we'll know the result either late tomorrow night or early Wednesday morning, and then we can get on with the business of fixing the parts of our country that are broken, and strengthening the parts that are not.

I know where I stand in this election, and what I want to see happen, so I'm not going to belabor the point. No matter the outcome of tomorrow, there are going to be millions of people who are disappointed with the results. Some will be beyond disappointed: distraught, maybe; super-righteously pissed, perhaps. So, once the election is over and the results are in, I think we need to look at some wise words penned by that master statesman, Stephen King. In his book, 11/22/63 (about a man who travels back in time to save John F. Kenneday from assassination), King wrote:

"I didn't vote for him, but I happen to be an American, and that makes him not just the president but my president."