Ringing In The New


I remember my first New Year's Eve party. Rather, I remember the idea of it more than the actual event. I was in either ninth or tenth grade and a friend of mine had a bunch of us over for a party, and it was a sleepover, too. There were no parents that I remember, because we had the run of the house and we had beer and booze, too; however, in the morning, my friend's mother made us all breakfast.

Being a teenager who was just getting into that period of experimenting with substances of a controlled nature, and who likely felt like he had something to prove, I made Johnnie Walker Black my drink of choice. Yeah, this would be why I remember the idea of the party more so than the actual party itself.

I might have thrown up. If I did, I was fortunate that it wasn't an all-night heaving session. I did struggle through the breakfast. Later, when I was home, I somehow managed to act normal through a New Year's Day at home which included a big afternoon dinner of fresh ham, when my stomach really wanted to reject anything coming into it. If my parents knew about my condition, they didn't say anything.

Thus began a period of life where New Year's Eve found me out and about at parties or bars, and subsequent New Year's Days found me in much worse condition than that first one. The upset stomach I had after that first party was child's play compared to the headaches, shakes, queasiness and all around horrible hangovers I regularly experienced over the next fifteen years or so. Hazy nights, hungover mornings.

The whole New Year's celebration thing here in the US is kind of crazy. We make resolutions--I'll be nicer. Spend more time with the kids. Exercise. Eat right. Stop drinking. Get that book published. The good intentions are always there, but then what do we do? We binge drink away the old year and start the new one off by lying on the couch, unable to move with sending the room spinning. Kind of hard to go on a five mile jog with a killer hangover, right? 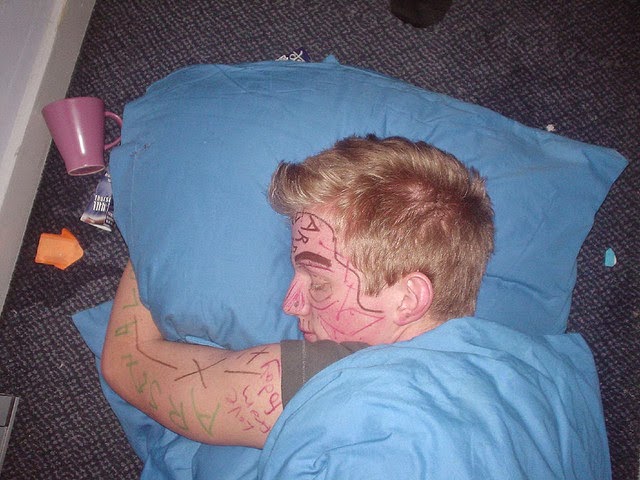 Over in Japan, the Magpie celebrated New Year by going out to a park with some of her friends to watch the sun rise on the new day. There were a lot of people there. It seems like this is the thing to do in Japan. It was quiet time, reflective time, and while she ended up sleeping half the day away, she woke up in the afternoon fully functional, no hangover, no shakes, and not having to ask her friends if she did something really embarrassing--or having to wash marker off her face. Seems like a much better way to start things off, don't you think?

Passed out guy photo by R4vi, used under creative commons license.
Posted by JeffO at 8:58 AM