That's what fell on our house last week. Three feet. It was kind of a lot. This is the Catbird on Wednesday afternoon, when the snow had (mostly) stopped. Granted, she's short (5' 3", I think). The car she is standing next to is a Jeep Grand Cherokee. It's just about six feet tall--when it isn't covered with three feet of snow. Needless to say, it was an exhausting couple of days--by the time we were done shovelling the driveway, the piles alongside it were about head high. 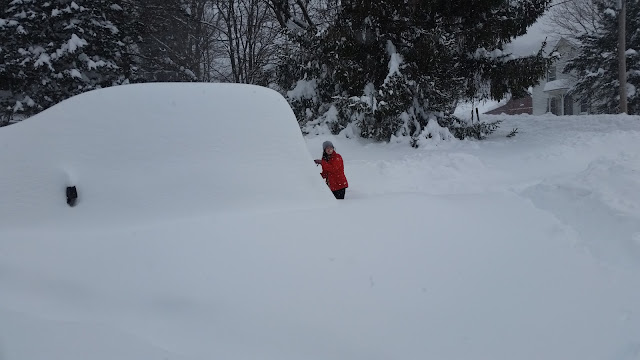 Three feet wasn't the winning entry in the snow sweepstakes, however. One of the towns in county picked up four feet. I'm glad it wasn't us!

The good news is the snow is already disappearing, though I soaked myself pretty well this afternoon wading through knee-deep snow in pursuit of the hemlock woolly adelgid, an invasive insect pest that is threatening eastern hemlock trees here on the east coast. I didn't find it, which is good news for the trees.

I think that's about it for me. Were you in the path of the big storm? How did you make out?
Posted by JeffO at 6:07 PM

Email ThisBlogThis!Share to TwitterShare to FacebookShare to Pinterest
Labels: weather